Creating the Vivaldi One

This month, we’ll debut a new APEX edition of the Vivaldi One—the limited-edition, all-in-one system created to celebrate 30 years of dCS—at Munich High End audio show. Here, we reflect on the original Vivaldi One’s creation, and our decision to release a new edition following the launch of our Ring DAC APEX hardware

Five years ago, dCS was preparing to turn 30—a milestone that we felt deserved a major celebration. As a team, we wanted to do something meaningful to mark the occasion—something that celebrated our past and present achievements while reflecting our ambitions for the future.

In the decade preceding our 30th, we had developed a new roadmap for dCS. We set out a vision to expand our work in audio innovation, and focus our efforts on creating beautifully designed, state-of-the-art playback systems that could support the changing ways people were managing and listening to music.

We developed a new visual design language and reengineered our core technologies, including the dCS Ring DAC system and Digital Processing Platform. We also developed a new user interface along with a myriad of new features and functions to support streaming audio. In 2012, we released the Vivaldi—a new flagship product series that brought together these various innovations and set a new standard for audio performance.

The Vivaldi series, which comprises a dedicated DAC, Upsampler, CD/SACD Transport and Master Clock, was met with huge acclaim. For the team at dCS, it was both a blueprint for a new generation of products, and a realisation of all that we set out to achieve from a design and engineering standpoint.

We followed this with the launch of our Rossini range. Alongside developing the Rossini DAC and Master Clock, we created the Rossini Player—our first single-chassis network music player with in-built DAC, network streamer, and CD/SACD transport.

When it came to celebrating our 30th, we decided to build on the launch of the Vivaldi and Rossini series by creating a new limited-edition product that could support playback from any digital source. Our vision was to create the world’s finest all-in-one system—a product that combined the core technologies and features from the Vivaldi series into a single, elegant, brilliantly engineered chassis.

"We thought, ‘can we make a single box player that’s as good as the Vivaldi stack?’ and that’s what we set about doing."

"For our 30th anniversary, we wanted to celebrate our achievements and efforts in audio innovation," says dCS Managing Director David Steven. "We’d never released a celebration product before, but we felt that with the Vivaldi, we’d achieved our technical and design goals, and really pushed the state of the art, so we thought, ‘can we make a single box player that’s as good as the Vivaldi stack?’ and that’s what we set about doing."

Back in the late 2000s, when the Vivaldi series was being developed, silver disc playback was still the dominant mode of listening—at least in high-end audio. The Vivaldi was created to support all forms of digital playback, including CD, SACD, streaming and USB, but it wasn’t until the time of the Vivaldi’s One release that streaming had really taken off. The Vivaldi One was conceived as both “a fantastic disc player, and a complete digital hub” says David—one that combined the technologies we’d developed for the Vivaldi’s launch with new features and updates released since, including the addition of a new, more advanced network card that could better support higher resolution streaming and audio via Connect models such as Spotify and TIDAL Connect. 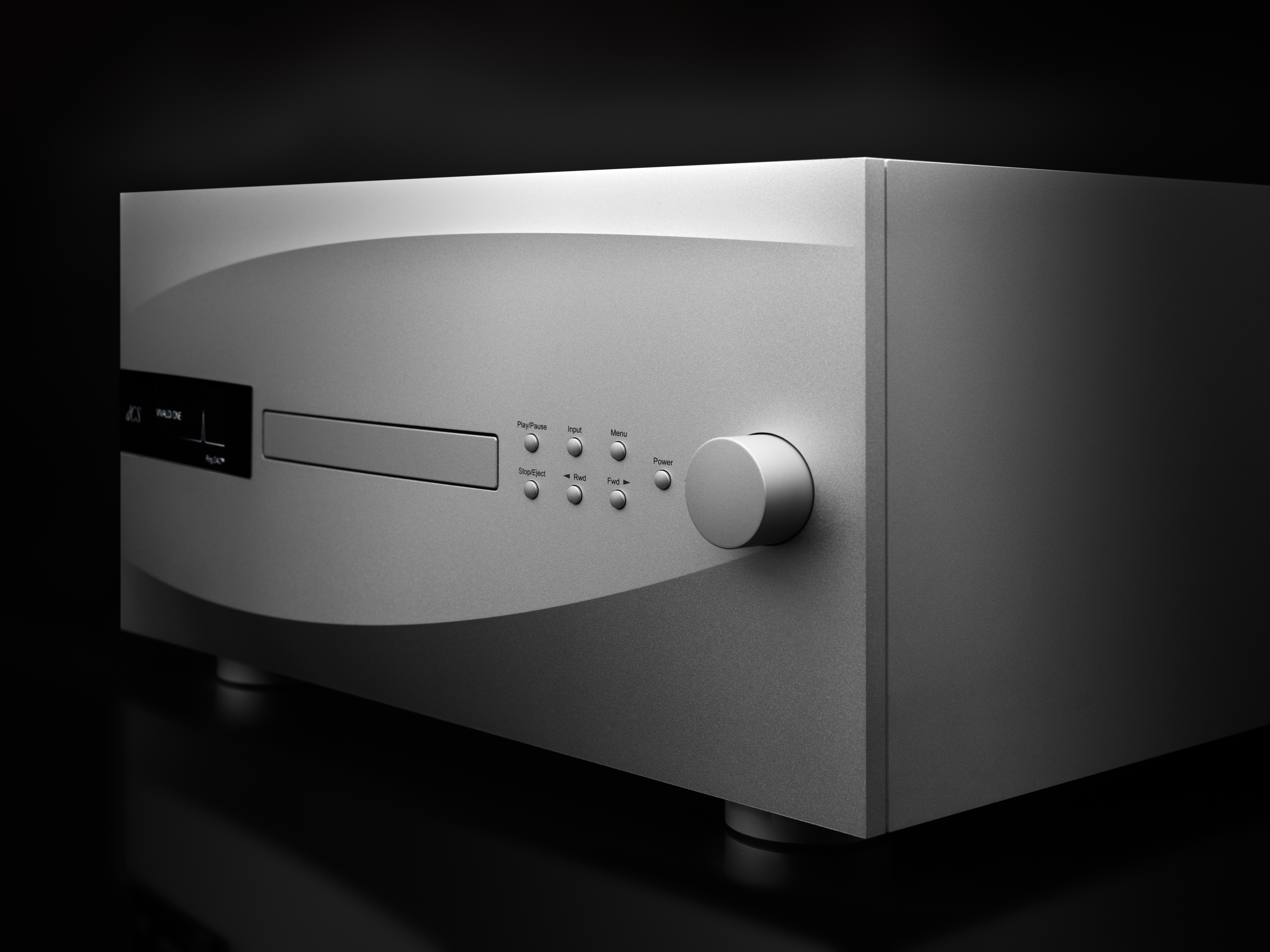 Combining the Vivaldi’s core features and technologies in a single chassis was an enormous challenge for the engineering team at dCS. Each of the products within the Vivaldi range is incredibly complex from an engineering standpoint, and physically large, and there was much more to creating the Vivaldi One than simply taking the core components from each device and placing them inside a single unit.

“When we decided to go ahead with the Vivaldi One project, there were a number of fundamental challenges we had to overcome: compressing the contents of three fully featured products into one mechanical chassis, whilst maintaining exceptional performance and ease of use,” explains dCS Technical Director Andy McHarg.

"Due to the mechanical constraints, we couldn’t just cram all the electronics into one box, and the performance compromises this would have entailed were just not acceptable, so we effectively had to start a lot of the work from scratch." 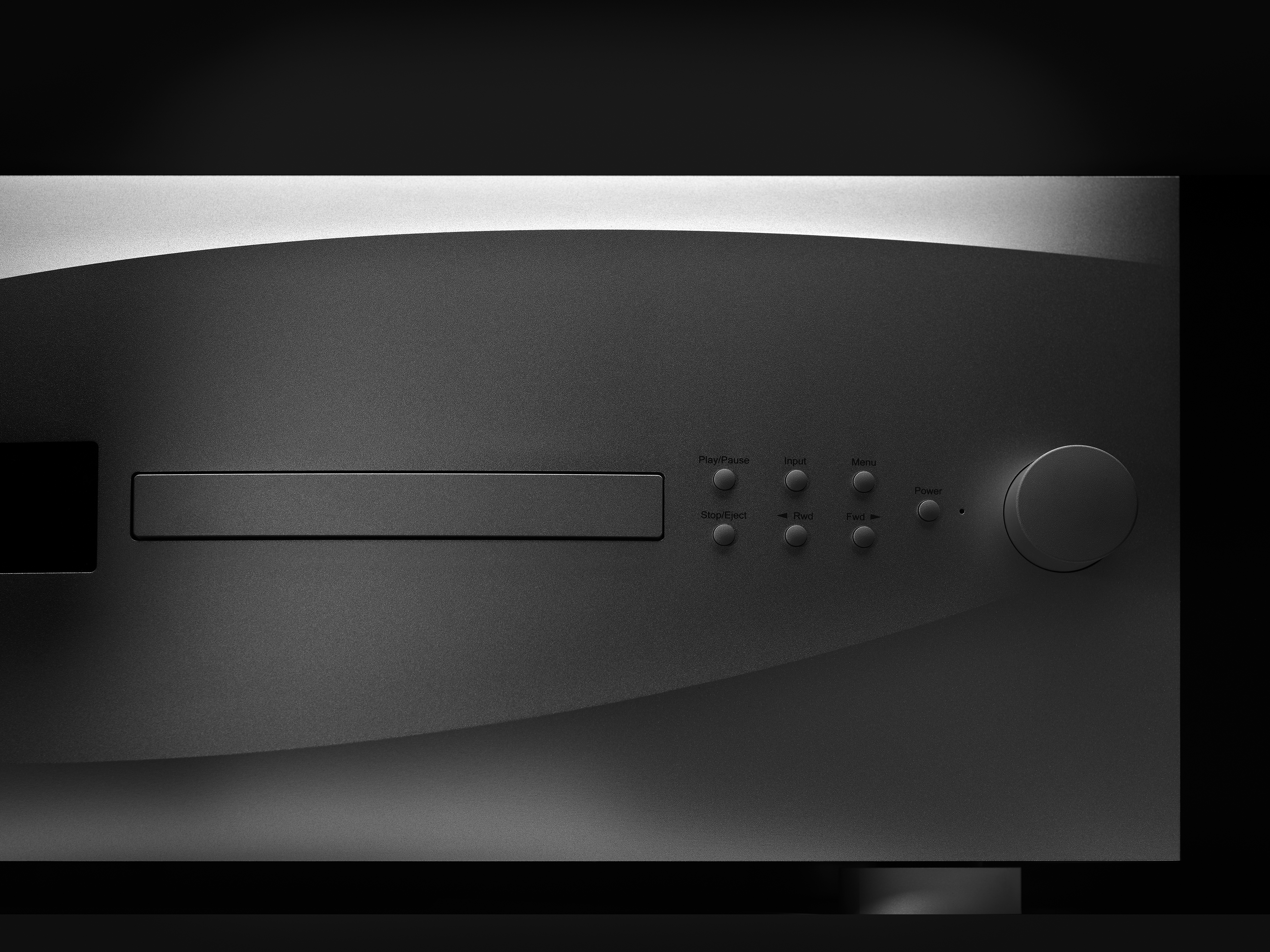 While the dCS Digital Processing Platform [the reprogrammable control board which acts as a central motherboard for all dCS devices] offered immense power and flexibility, the team had to build some bespoke circuitry for the Vivaldi One, which allowed them to separate delicate analogue sections from digital parts.

Clocking presented a further challenge: “Clocking the SACD mechanism itself required much ingenuity to prevent it contaminating any of the analogue sections or power supplies,” adds Andy. In addition to this, processing and control had to be split out across a number of FPGAs, instead of a single chip, to retain the functionality and performance of the individual components in the Vivaldi stack, while still maintaining compatibility with the dCS Mosaic streaming platform.

“We have a bit of an advantage, in that our hardware is inherently modular, so does lend itself to customisation,” adds dCS Director of Product Development Chris Hales. “Within any product though, there are always conflicting requirements—the rear panel, for example, needs to be laid out logically for the benefit of the user, but that may not correspond to what is best for performance. The more features you cram in, the more of these conflicting requirements there are to juggle … and sometimes, you have to come up with novel solutions to work around them.” 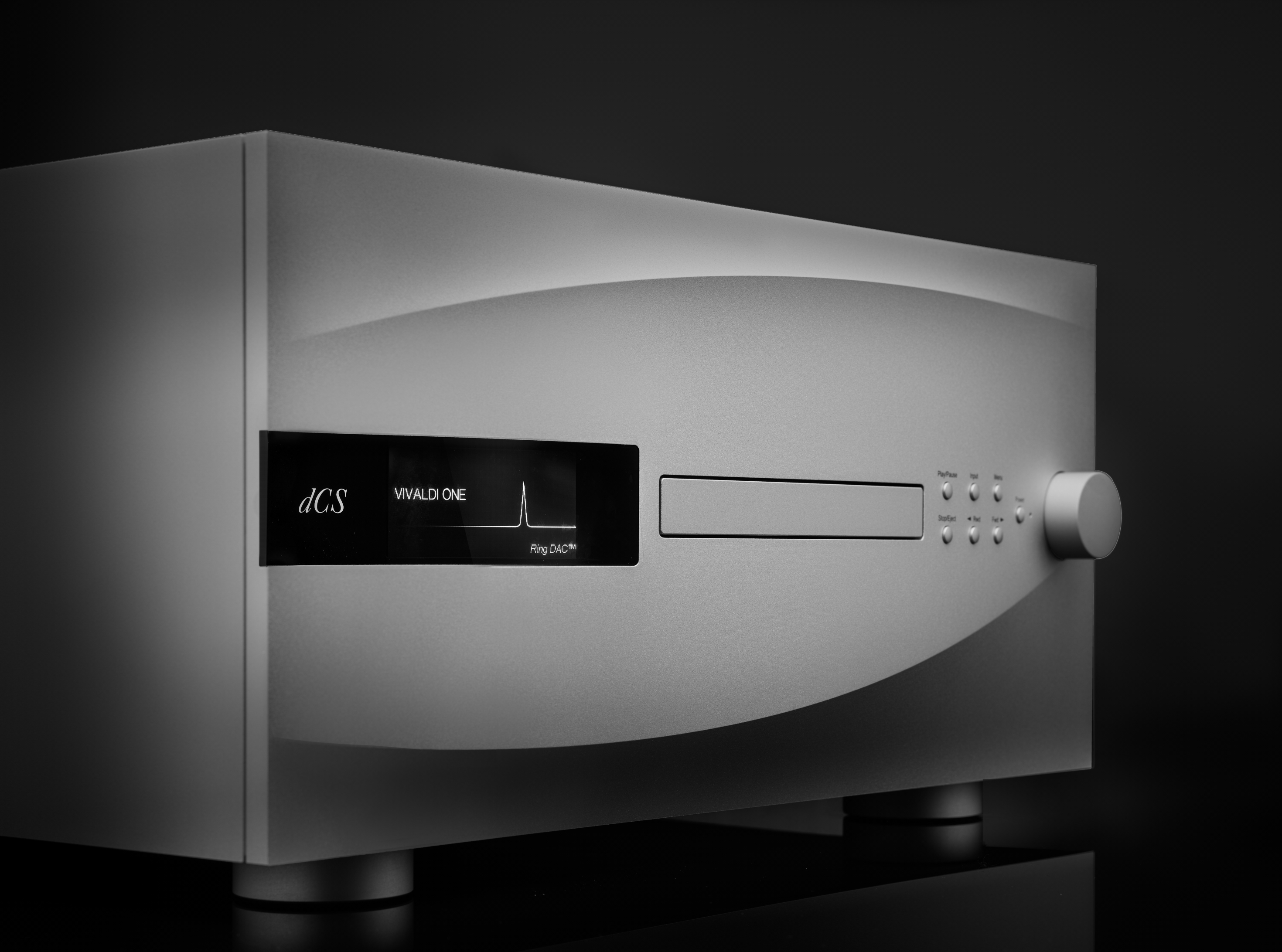 The result of all this is a supremely powerful audio system that can support virtually any high-end hi-fi setup, and all forms of digital playback. This combination of flexibility, quality and timeless design is, David believes, key to the Vivaldi One’s appeal.

“The Vivaldi One is a statement,” says David. “It is, we believe, the best single box music player on the market, when it comes to streaming or disc playback. It set the reference when it was launched, and with our updates to the Ring DAC mapper, a continual stream of improvements and enhancements, and now the addition of the Ring DAC APEX, it’s continued to improve and remain an amazing one box player."

The original Vivaldi One system was produced in a limited edition of 250 units, which quickly sold out, and several years later, we continue to receive regular requests from customers keen to purchase a Vivaldi One. 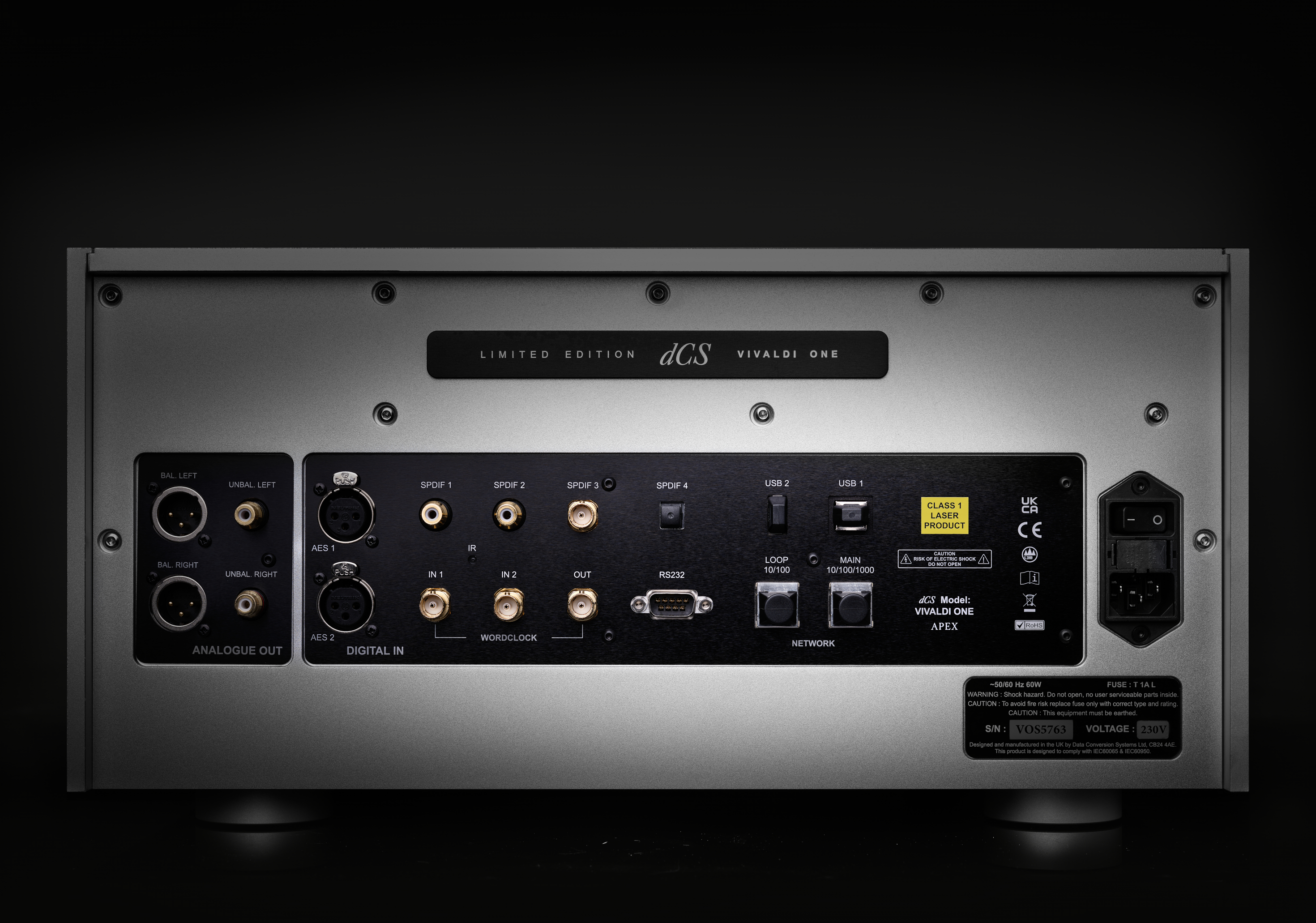 In the five years following its release, we’ve continued to enhance and refine the Vivaldi One’s performance, delivering updates free of charge to existing owners. While we were proud of the product’s success, however, we had no plans to re-release it. The Vivaldi One was conceived as a limited-edition system and after its launch, we were keen to focus our efforts on developing new products (such as the Bartók DAC and Bartók Headphone DAC), as well as working on upgrades to the existing Vivaldi and Rossini ranges.

Then, in 2022, we released a new, enhanced version of the dCS Ring DAC, the proprietary digital-to-analogue conversion system found inside all dCS DACs and music players. This major hardware upgrade allowed us to further enhance the performance of the Vivaldi DAC, Rossini DAC, and Rossini Player, as well as the Vivaldi One. In addition to launching a global upgrade programme allowing existing VOS owners to benefit from the new hardware, we decided to create a small number of new Vivaldi One units that came with the APEX hardware as standard. The new, APEX edition units are a celebration of all that we’ve achieved with APEX. With dCS turning 35 this year, we felt it was a perfect time to revive this much-loved and celebrated product. 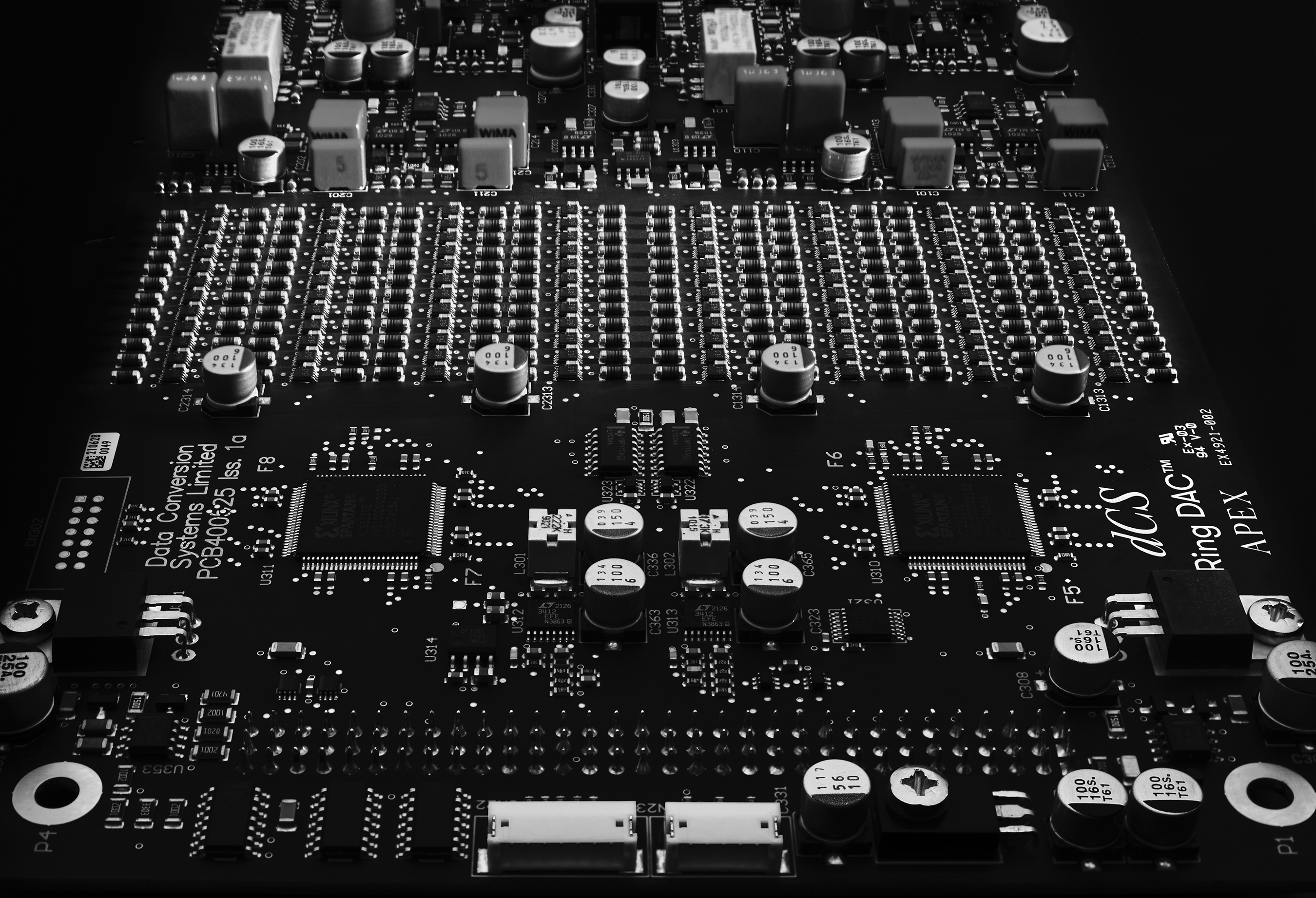 As we announced last week, the Vivaldi One APEX is limited to 50 units, which are available to order now from our network of specialist retailers. Units are available in a choice of black or anodised silver, and offer the same range of features as the original Vivaldi One system, with the added benefit of our Ring DAC APEX hardware.

The system will debut at the 2022 Munich High-End audio show, and we’ll be hosting a series of demonstrations throughout the four-day event. We’re delighted to be attending the show for the first time in three years, and we’re hugely looking forward to sharing the VOS APEX and our latest engineering advancements with the global audio community. “We’re really excited to play the Vivaldi One APEX at Munich, and celebrate the beginning of our 35th year with all of our partners in audio,” says David.

dCS will be attending Munich High-End show from May 19-22. You can visit us in Room F209, Atrium 4. More information about the Vivaldi One APEX is available here. Click here to learn more about our Vivaldi product range.