End to End Excellence, The People Behind The Product

“I didn’t enjoy school very much, I was in a hurry to learn by doing things,” says Dan Thomas

“I didn’t enjoy school very much, I was in a hurry to learn by doing things,” says Dan Thomas. “I taught myself the practical way – everything from welding to playing the guitar. I’m not very good in a classroom, I much prefer real life! I loved music – and still do – but by the time I left school I was getting into marine tanks. It’s a pretty unusual hobby I admit, but I love building and running them. They’re a lot more delicate than a normal freshwater fish tank – there are more things that can go wrong very quickly. But there’s just nothing like having a piece of the ocean in your living room!”

Dan is originally from Swansea – which perhaps explains his interest in oceans and fish – but moved to Stevenage aged eleven. He commutes to dCS in Cam-bridge everyday, and after a hard day’s work there’s nothing he likes more than working on his very own barrier reef! “I have a pretty large tank, about eight feet by two-and-a-half feet by two-and-a-half – which translates to about 1500 litres – so it takes up the whole wall of my Dining Room. I try to be as environmentally friendly with it as I can, so instead of getting large corals out of the ocean I’ll get an aquacultured frag and put that in. It might only be an inch but within a few years you’ll have a football sized coral that you can then pass on frags to your friends.”

He has some very exotic fish, too. “I’ve got one called a Gold Flake Angel which is quite a rare and beautiful fish; my wife gave it to me for my thirtieth birthday. I’ve also got a Regal Angel which is also difficult to keep, and I also love Wrasse. They’re particularly interesting because they actually sleep under the sand. When the lights start dimming down they literally just shove their heads into the sand and then flip themselves underneath it to hide. Every so often you’ll walk past at night and they won’t have hid themselves so well! I have Yellow Tangs that go around eating the algae off the rocks, and crabs and snails that also keep the tank clean. My conches and starfish keep the sand bed turned over, so it’s partly self-maintaining if you get the balance of the sea creatures right. Still, I wouldn’t call it a peaceful pastime. It’s calming after being at dCS all day but I always end up working on it…” 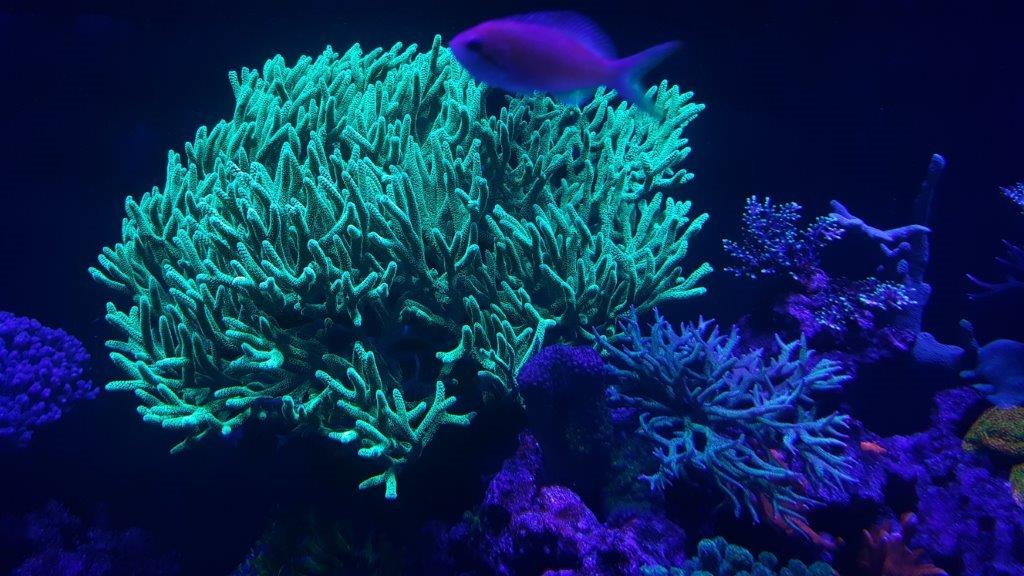 Every man needs a hobby, but Dan has more than one – and there’s a pattern here as he takes them all really seriously. “Yes, you can tell I am quite OCD about everything. I love music so obviously I had to get a full four-box Vivaldi system”, he explains. “I was really lucky to be able to buy it, but it does sound fantastic. It’s not quite as good as what we’ve got in the dCS listening room, but it’s work in progress! I’ve managed to piece together things over the years. I’ve got Pass Labs amps and Audio Physic Tempo 2 speakers, which are pretty good. I’m fortunate with my job that I can borrow different bits and pieces from work, so I’m trying all kinds of exotic cables…”

Dan is one of the only people at dCS who owns the four-box Vivaldi, which betokens a certain seriousness in his nature. “I think most people have got Rossini Players, and some have Puccinis which they bought a while back. Actually I started off with one of these a good few years ago, and then I decided to upgrade the DAC, and it sort of escalated from there. You know, I thought I might as well go for it, if I am going to go for it. It just sounds incredible now.”

Dan “just kind of fell into” working for dCS, as he puts it. “I wanted to do something with my life. When I was about twenty years old, I wanted to get some skills because I wasn’t happy with my life. I had a friend who was working for the company and he said they were looking for someone, so I came for an interview and started when I was just twenty one as a trainee workshop technician, and I have been here for ten years now. Because it’s obviously an expensive product, everything has to be perfect. So I have been trained very well and have got a good eye for detail – which also helps with the fish tanks! I suppose I am pretty meticulous about everything, really. I like to think of every product we make as being mine. I want it to be as good as the one I’ve got at home – I don’t want to see anything that would upset me. I’d love to say that my one at home is put together extra specially, but they really are all the same. They have all got to be perfect, we won’t let anything go that isn’t.”

A keen guitarist, one of his favourite albums is Guns N’Roses Appetite For Destruction. “There’s some intense playing on that; everything on there is very difficult to play. It makes me feel a little bit sick that all the guys in the band were about seventeen when they wrote that. So, it’s crazy how good they are. That Slash had been playing guitar for maybe three or four years while it takes me months to learn one of their songs drives me crazy. I went to see them live last year when they played in London, and it was pretty spectacular. Best gig I have ever been to.”

“I tend to take everything that I do very seriously. For example, I’m really into fitness too. I started that off because I used to be overweight when I was in my late teens. I began to research a lot about nutrition, and started going to a gym. I’ve done lots of research and nowadays I actually weigh all my food – I record everything that I’m eating, and record my training. If it is something I am passionate about, then I go all out!”

Creating the Vivaldi One

This month, we’ll debut a new APEX edition of the Vivaldi One—the limited-edition, all-...

“Back in the early nineteen seventies,” says Chris Hales, “electronics was very much th...

I have said this myself, and it might sound a bit glib, but I am genuinely proud of the...

“I am massively grateful for my opportunity”, says Ben Ashcroft. “Some people say that ...

“My thinking time ranges from about forty nanoseconds to about three years”, says dCS T...