A boxset of reissues grabs the classic recording spot here this month: 12.5 hours (or 14 discs, if you buy the physical article) drawn from the 1934-1970 Warner recordings of the great Hungarian conductor George Szell. As for new releases, we have a wonderful programme of Italian Baroque ortario, a surprising exploration of 17th century English melancholy and some festive escapism from The Choir of St John's College, Cambridge 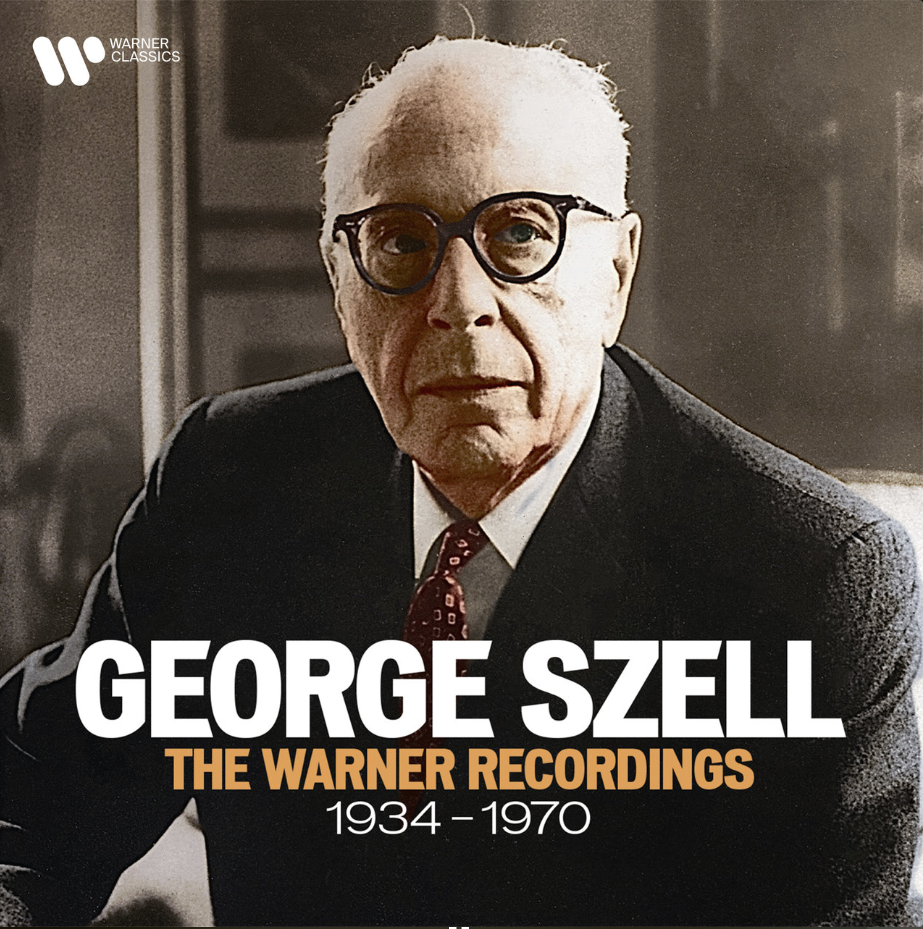 A boxset of reissues grabs the classic recording spot here this month: 12.5 hours (or 14 discs, if you buy the physical article) drawn from the 1934-1970 Warner recordings of the great Hungarian conductor George Szell, who led the Cleveland Orchestra from 1946 until his death in 1973.

Szell was known for the lucidity, precision, sternness and detail he drew form his orchestras – musical qualities that tallied somewhat with his real-life persona as a tyrant on the podium, and a meticulous and measured interviewee when faced with a journalist. This new collection offers a well-chosen spread of repertoire, orchestras and soloists via which to appreciate his sound.

While there’s a wealth of great material to choose from, I’ve gone for the remastered mono recording of Beethoven's Violin Concerto for this month’s playlist, which Szell recorded in 1934 with violinist Bronislaw Huberman and the Vienna Philharmonic in the Vienna Konzerthaus. This is not only one of Szell's own greatest recordings, but also one of the greatest recordings of this concerto ever made. In it, you’ll find the aforementioned clarity and precision from the orchestra, along with Huberman himself on brilliant form. His rhythmic precision is peppered with sudden accelerations and fiery dynamics and some deliciously coloured portamento slides and flicks.

This, however, is just a sliver of what this vast box set has to offer. If you're keen to explore more by yourselves, then I’d recommend moving onto his 1970 Schubert Symphony No 9 with the Cleveland, before hopping back to the 1938 recording of the Dvorak Cello Concerto with the great Pablo Casals and the Czech Philharmonic Orchestra, a performance which Szell himself described as “memorable” in a 1969 interview with Gramophone.

From there, it’s on to this month’s pick of new releases, which begins with a programme of Italian Baroque oratorio arias for countertenor from Philippe Jaroussky, followed by a highly imaginative concept album from Baroque violinist Théotime Langlois and lutenist Thomas Dunford, and a collection of Advent carols from the Choir of St John's College, Cambridge. And finally, because it's Christmas, I've snuck in a bonus track from one of my favourite albums by The King's Singers to round things off.

When French countertenor Philippe Jaroussky releases a new album, you know that it’s likely to be both wonderful and treading at least some previously untrodden ground. This programme of Italian Baroque ortario delivers on both of these fronts, with ravishing performances and five world premiere recordings, all wrapped up in some immediate yet natural engineering.

“It's my belief that composers from this period often gave the best of themselves when called upon to set the great sacred histories of the Old Testament to music,” says Jaroussky in his sleeve notes.

“Embodying in music a saint, or even sometimes God himself, calls for a stronger spiritual sense than do the amorous passions of some prince or queen.”

To that idea of artistic riches and spiritual potency, we can also add a sense of miracle. The album was initially scheduled to be recorded in April, but sessions were delayed until June 2020 due to Covid restrictions, and it doesn’t feel completely fanciful to say that you can feel the sense of relief, release and musical passion that the musicians must have been feeling when they were finally reunited and allowed to complete the project.

Take their programme-opening “Perche piu franco” from Pietro Torri's Abramo. This aria actually depicts one of the Bible's most disturbing scenes, when Abraham prepares to obey God's command to sacrifice his only son Isaac. Torri, however, turns it into a transcendental, major-keyed aria in which Isaac tells Abraham that in order to make this sacrifice, he must forget that he is his son. Here, Jaroussky's voice is both wonderfully light and delicate, luminous-toned and glowing. Artaserse, meanwhile, are equally giving everything. For one of their best moments, hop to Antonio Maria Bononcini's minor-keyed “Bacio l'ombre e le catene”, where their sighing accompaniment alternates between ravishingly blended tutti passages and deftly shaped chamber-forces weavings around Jaroussky's voice, followed by a Sinfonia all for themselves. It's these two arias which I've included in the playlist, but there are other lesser-known names to be enjoyed on the programme, including Nicola Fago and Fortunato Chelleri, alongside the likes of Handel and Vivaldi.

What is it about concept albums all of a sudden? Not only are they arriving at a rate of knots – but they also seem to be largely clever, creative and beautiful things, dropping us into new worlds we didn’t even know we wanted.

And so it is with young French Baroque violinist Théotime Langlois de Swarte's The Mad Lover, for which he's partnered with lutenist Thomas Dunford. A surprising exploration of the notion of 17th century English melancholy, it uses a three-minute ground plucked from English composer John Eccles's incidental music to the 1616 comedy of the same name by the English dramatist John Fletcher as a springboard from which to imagine the music that might have been played by an itinerant violinist from the composer's own time, as he roamed the streets with just a lute player to accompany him, hooking the interests of passers by with small-forces versions of popular grounds and preludes, along with some of the more sophisticated music that would have been heard at court and in the private homes of the affluent.

The musical result is an exquisite, intimate-voiced programme with the power to properly get under your skin. Langlois de Swarte draws a breathtaking array of colours from the soft-toned original 1665 Stainer violin he's on. Equally mesmerising is his singing quality, and linked to that, his ability to unfurl a perfectly smooth legato line, no matter how wide the leaps between a melody's notes. Dunford provides a perfect accompaniment, matching him colour for colour. The engineering, meanwhile, offers closeness and bloom, but subtly so – just enough to accentuate the intimacy, but miles away from ever feeling overproduced. Really, this is a recording which rewards listening from end to end, but for the playlist, I've selected the Sonata in G minor by Sonata sesta for violino solo by Daniel Purcell (believed to be a cousin of the great Henry Purcell), the Fantasia in A Minor “Alia Fantasia” by Nicola Matteis Jr and finally, A New Division Upon the Ground Bass of “John Come and Kiss Me” by Clancy Eccles.

The Choir of St John's College, Cambridge, has been broadcasting its Advent Carol Services on BBC Radio 3 since 1981, and its Director Andrew Nethsingha has been commissioning an annual new work for the service since 2008. This latest collection of recordings follows on from the choir’s first Advent Live album, released in two years ago, and features moments from their 2008, 2018 and 2019 services. In addition to repertoire staples such as Otto Goldschmitt's A tender shoot (heard each year at the start of their Advent services), it also features four of Nethsingha’s original commissions: Gabriel Jackson's Vox clara ecce intonat from 2013, Cecilia McDowell's A Prayer to St John the Baptist (2018), Judith Bingham's An Introduction to Hark, the glad sound (2019), and the first in the annual commissions series, John McCabe's The last and greatest Herald (2008).

As for how it sounds, beyond the interest and variety of the repertoire itself, for a strange year in which we’ve been denied the usual joys of carol services, the combination of the choir's distinctive colouristic and emotional warmth, and the beautifully captured acoustic of the college's chapel, makes this musical escapism at its finest. I've given you the Goldschmitt, Hark the Glad Sound with Judith Bingham's highly effective introduction for choir and saxophone (it’s a wonderful moment when the organ finally kicks in) and a traditional carol, The Linden Tree.