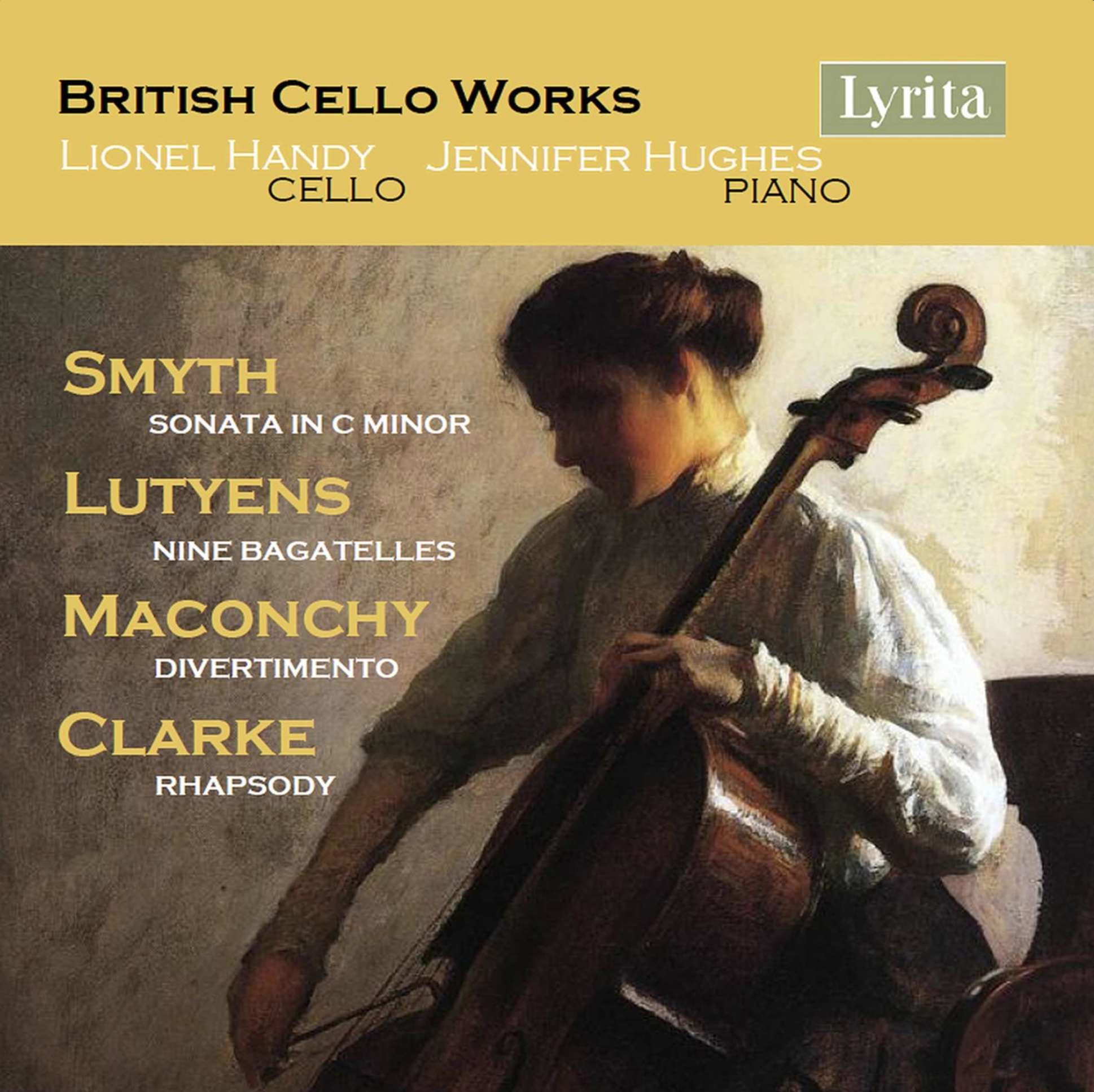 Welcome to July’s Only the Music! I’m opening this month by making you work harder than I perhaps habitually do with my back catalogue recording choice, because I’ve chosen the 9 Bagatelles Op 10 for cello and piano – recorded by Lionel Handy and Jennifer Hughes – written in 1942 by Elizabeth Lutyens (1906-1983). Lutyens was a composer who achieved a substantial amount in her time, not least the fact that she was Britain’s first female composer to earn her living entirely through composing, including her fair share of BBC commissions.

Yet she’s also a composer whose music has been almost entirely overlooked since her death, even over these past few years as history’s forgotten female composers have been uncovered and championed. And the reason is no doubt because, rather than composing tonal, melodious, immediately and obviously easy on the ear music, Lutyens was instead one of Britain’s first pioneers of 12-tone harmony.

And, frankly, it’s just much easier to tick the twentieth century resurrections box via easy-on-the-ear Ruth Gipps and Grace Williams. However I happen to be a fan, meaning it was a huge treat a couple of weeks ago to turn up at Wigmore Hall to review cellist Natalie Clein, only to find Lutyens’s 9 Bagatelles on her programme. Not least because I’d somehow managed to not even know of their existence! A set of miniatures so very small that the whole lot comes in at under nine minutes, these were penned early on in Lutyens’s career, as she battled to get anything written alongside bringing up children.

Yet despite the conditions of their composition, they are perfect, clever little creations that immediately hook the ear in with the personality and intelligence of their contrapuntal conversations, and with their subtly contrasting individual characters nevertheless so deftly delineated, that despite their atonal harmonic language, and the fact that they’re performed seamlessly, it’s clear even to the untrained ear as to where one tips into the next. I was entranced, and thus thrilled when I discovered this one recording of them. 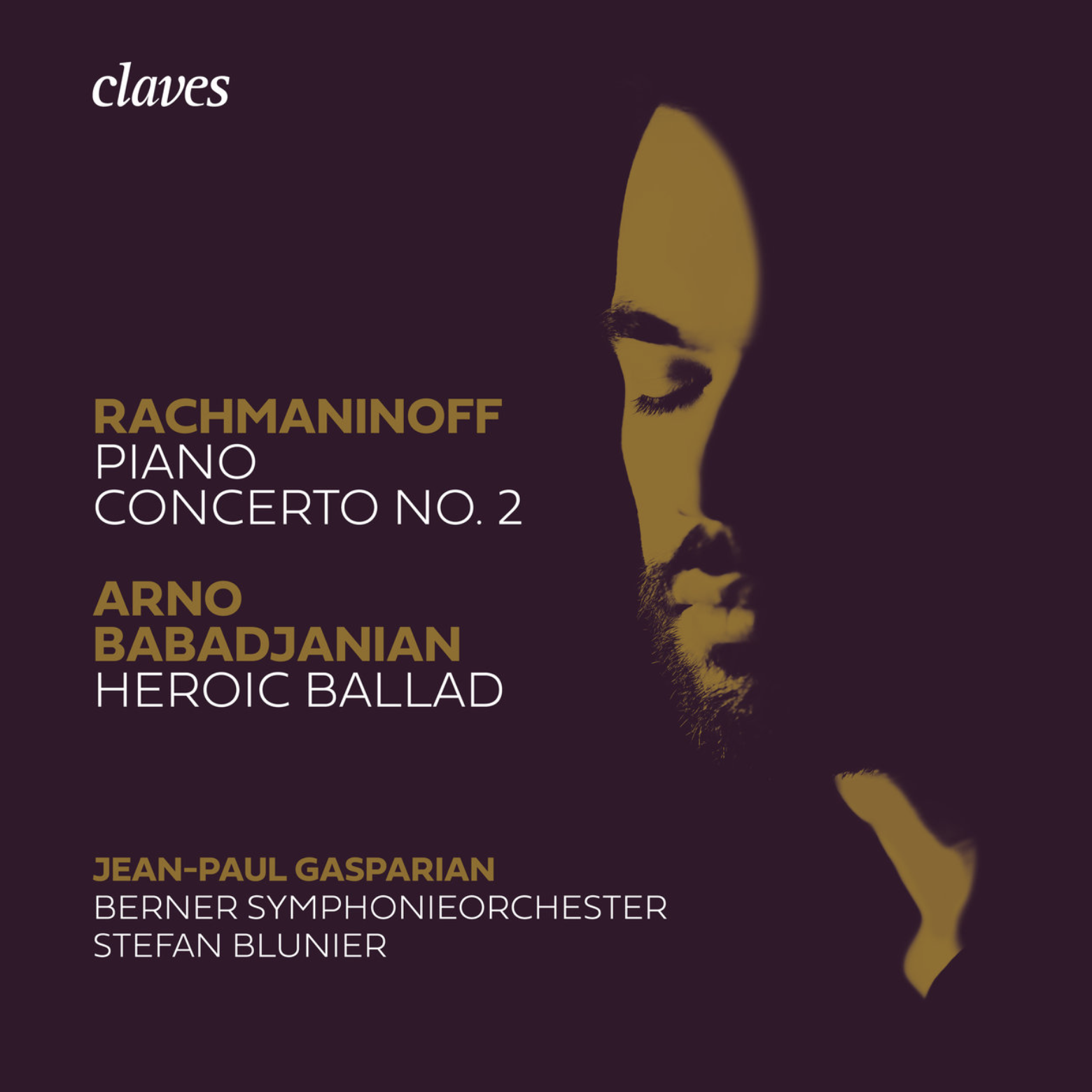 It’s become an annual event here for me to push under your noses the debut orchestral recording offered by the Swiss winter festival, Sommets Musicaux de Gstaad, to the winner of its recital-series-shaped international young artist competition (in fact Anastasia Kobekina first appeared in Only the Music through her own Sommets winner’s recording, after triumphing at 2018’s Cello Year); and this year’s release, fruit of 2021’s Piano Year, is as eminently attention-worthy as ever: French pianist Jean-Paul Gasparian with the Berner Symphonieorchester under Stefan Blunier, pairing Rachmaninov’s Piano Concerto No 2 with Soviet-era Armenian composer Arno Babadjanian’s rarely-heard Heroic Ballad for Piano and Orchestra, written in 1950.

It’s arguably a brave move for a relative unknown to tackle Rachmaninov 2 for their first concerto album, one of the pianistic repertoire’s most recorded and performed warhorses as it is. Yet Gasparian has more reasons than most for doing it regardless, because while he himself is French, his concert pianist father is Armenian-born. The result was that Gasparian grew up immersed in a Russian musical universe, listening to the Soviet-era recordings of its greats such as Richter, Gilels and Mravinsky.

Rachmaninov’s 9 Preludes op 39 was therefore a natural choice for his debut solo recording in 2018 (made while a first-year student), followed by an acclaimed further Rachmaninov solo recital earlier this year for Evidence. It was then a Beethoven-Rachmaninov programme that won him the Sommets prize. So, perhaps inevitably, the overall impression leaping out now from this Second Piano Concerto reading is its sheer naturalness. Nothing forced or overblown. Just fresh, flowing, poetic, vital, exuberant playing.

The album’s real USP, though, is the combination of a convincing Rachmaninov performance with the aforementioned lesser-spotted Babadjanian. For starters, these two pieces are hugely complimentary bedfellows on both historical and stylistic levels: Rachmaninov’s concerto was written in 1900, seventeen years before the October Revolution would force him to flee Russia and eventually settle in the United States; Babadjanian’s Heroic Ballad meanwhile, written fifty years later from within the USSR, often sounds strikingly Rachmaninov-breathed with its lush textures, rich harmonies, unabashed high romanticism and pianistic virtuosity – but with the additional influence of Armenian folk music lending it an exotic twist all of its own.

As for Gasparian, he serves up all the swagger, poetry, spice and virtuosity the Ballad demands, with yet more of that ease and freshness. Add the Berner Symphonieorchester being with him every step of the way, and such is the sizzling, Hollywood-esque largesse and punch of its climax, that you actually feel like cheering as its final roar hangs in the air; and if that isn’t the mark of a good recording then I don’t know what is. 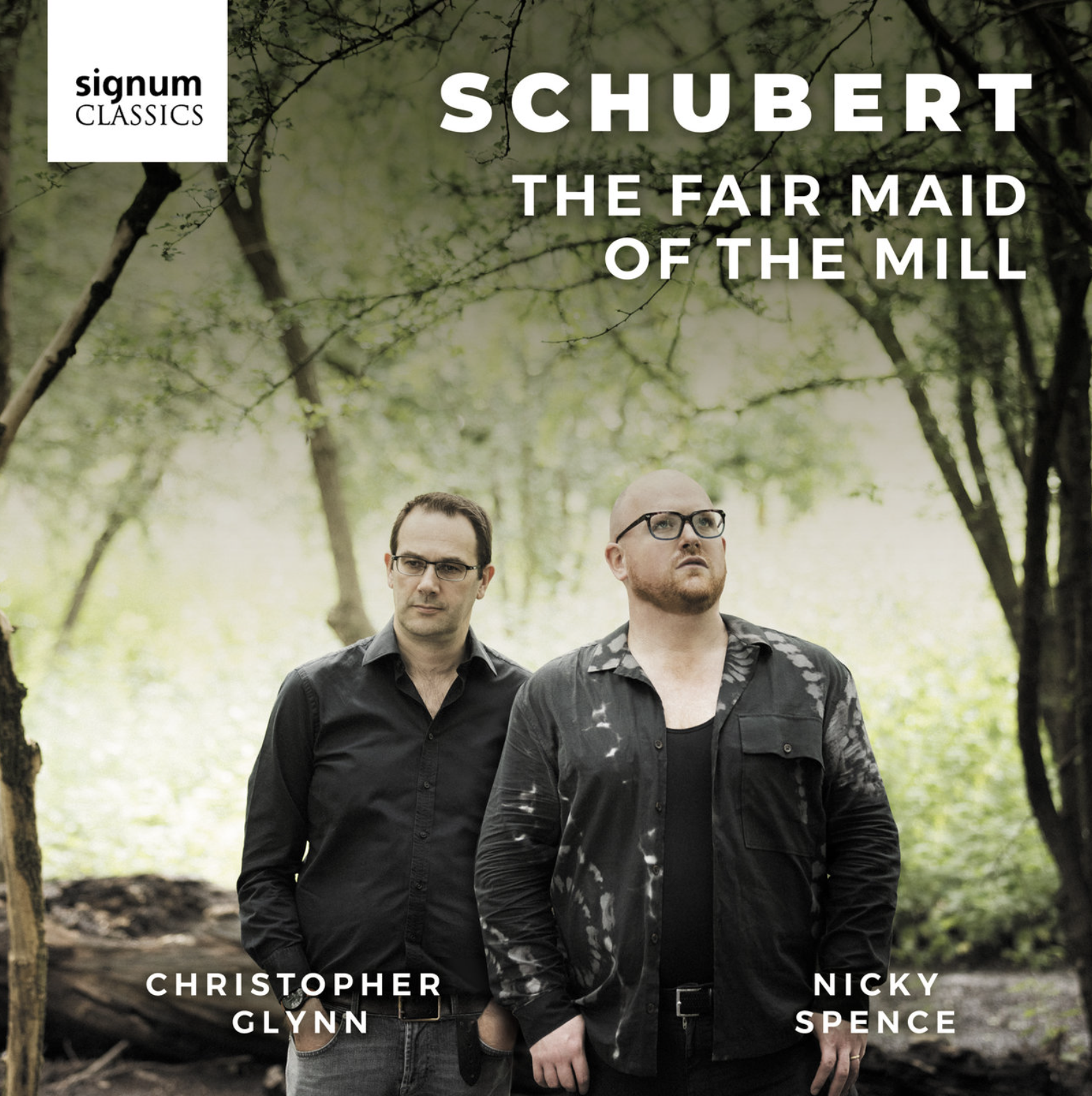 Schubert: The Fair Maid of the Mill

There’s a good chance that the idea of an English-language version of Schubert’s famous song cycle, Die schöne Müllerin, sounds as though it should sit somewhere on the scale between travesty and abomination. At least among Lied purists. Composed in the early 1820s, the cycle sets a collection of poems written in 1820 by Wilhelm Müller which tell in first-person narrative the tale of a shy young journeying miller who arrives at a new mill, falls in love with its beautiful maid, but when he can’t can’t get close to her and watches instead as she gets whisked off her feet by a dashing huntsman, drowns himself in the mill brook; and Schubert’s music for what is essentially a psychological monodrama, charting the man’s progression from hope-filled joy to despondency to anger to fatal despair, is profoundly bound up with the text – accompanying, reacting and interacting with it. So to ditch it….?

Yet, when ultimately the aim of the cycle is to tell a story, there’s a lot to be said for being able to having one’s ears and brain register the words’ meaning instantly, rather than one step removed through a translation.

So step forward pianist Christopher Glynn, who has commissioned Jeremy Samms (theatre director, lyricist, translator of plays and opera libretti, as well as composer, orchestrator and musical director) to write a brand new English translation, and then recorded it with one of Britain’s most in-demand younger-generation tenors, Nicky Spence, yielding readings as vital and immediate as one might expect.

In fact the text is so direct and modern of vernacular as to take a bit of getting used to, if you’re used to hearing it through the prism of early nineteenth century language – take stanzas such as, ‘If I had the strength of a giant/I would whirl the wheels through the water/I’d quadruple our Master’s output/ And astound his gorgeous daughter’. Once you have acclimatised, though, it’s a wonderful thing to be instantly registering the degree to which Schubert’s music is charting, pre-empting, reacting to, the texts’ action and emotions; with especial rewards reaped when there’s an emotional odyssey wrapped up in a single song, such as ‘Her favourite colour’ (‘Die liebe Farbe’ as was).

Equally just the ticket is Spence himself, sounding fresh-feeling and dramatically potent, and with his easy vocal agility a further boon – the defeated, tender beauty with which he glides up a sixth over ‘close your eyes’ in the final, ‘The Brook Sings a Lullaby’ (Des Baches Wiegenlied), is spellbindingly devastating. And always there’s Glynn himself catching every mood and nuance of the pianistic writing and how it interacts with the voice.

In fact, it doesn’t feel like an exaggeration to describe this as a revelatory recording. Not to mention a valuable new addition to the Lied repertoire. Clearly, in playlist terms, chopping this cycle up feels sacrilegious. But when that’s my job, I’ve given you the first eight songs, up to and including Good morning (‘Morgengruss’), thus taking you far enough for our poor young miller’s downwards descent to have begun. 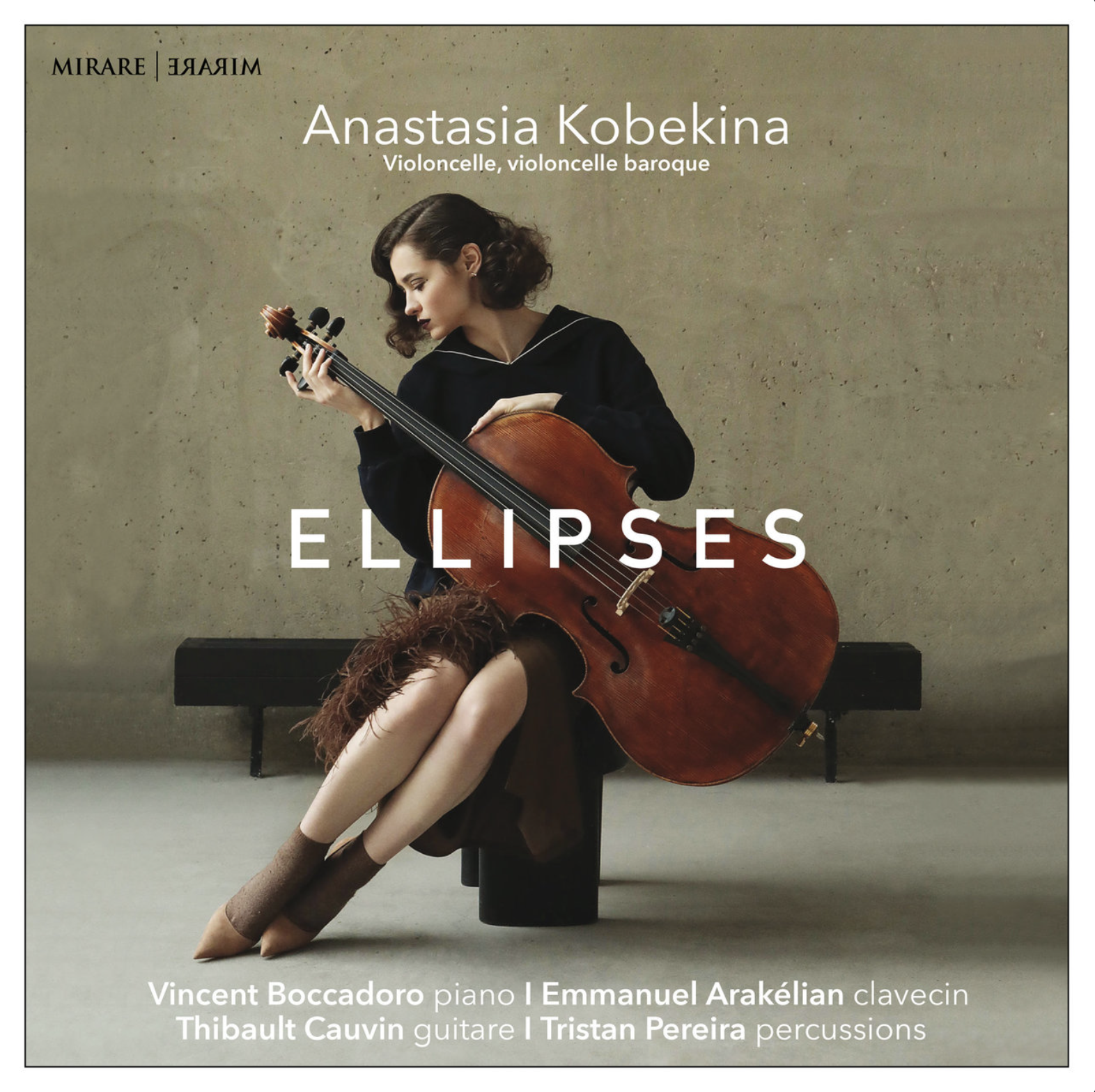 Often when one talks about a young artist signing to a specialist classical record label on the level of Mirare, it’s couched in terms of artist achievement. Yet in the case of young Russian cellist Anastasia Kobekina, the instinctive reaction is to instead congratulate Mirare themselves. Newly a recipient of a prestigious BBT Award, having just graduated from the BBC New Generation Artist scheme, and performing everywhere from Amsterdam Concertgebouw to the Verbier Festival, Kobekina is widely regarded as one of the most distinctive, creative, curious and, well, musical young cellists to emerge in recent times: active in repertoire from baroque to contemporary; playing both modern and period instruments; in possession of such a seemingly effortless combination of technique and lyricism that, despite her chosen instrument’s natural slight unwieldiness, has her fingers dancing over the fingerboard with mesmerising grace laced with puckishness.

So it’s an utter delight to find this debut recital for her new record label home to be such a true representation of her artistic personality, and for its execution to more than live up to expectations. Conceptually, Ellipses sees Kobekina suggest a vision of music as a permanent blend of eras and cultures, from Italian cellist-composer Giovanni Sollima’s Fandango per violoncello solo of 2016, via Baroque works by the likes of Marin Marais and Willem de Fesch, Debussy’s Cello Sonata and Faure’s Sicilienne, through to her own father Vladimir Kobekin’s Gallardo pour violoncelle et tambourin.

In working terms meanwhile, it presents her collaborative spirit through multiple duo partners: Thibault Cauvin on guitar, Vincent Boccadoro on piano, Emmanuel Arakélian on harpsichord and Tristan Pereira on percussion. Then, beyond the variety that such a proposition inevitably promises, what marks out its execution – beyond singing lyricism, percussive fire and flash, fluttering virtuosity and rhythmic panache – is both the programming, production and performances’ seamless connecting of nationalities and time periods. Take the quartet of different Siciliennes, their lilting rhythms running almost without break from one to the next – from Willem de Fesch (1687-1761, Netherlands), to Faure (1845-1924, France), to Maria Theresia von Paradis (1759-1824, Austria), to Johann Ernst Gaillard (1687-1747, Germany/UK).

The album snapshots I’ve chosen for you here are, first, her pairing of two very different composers’ takes on the famous ‘La Folia’ theme, the first by Marin Marais (1656-1728) and the second – in the same key, sounding like a continuation, and published only last year – by Thierry Eschaich (b 1965). Then Debussy’s Cello Sonata.