Remember 2006? Taylor Swift released her first single, while Eminem, Beyoncé, Snow Patrol and Keane dominated the charts – and the music industry felt like a happy and prosperous place. Then in December of that year, Tower Records went into liquidation and closed many music stores around the world. Suddenly a chill went through the industry, as insiders feared it was a portent of things to come…

Tower’s demise was a sign of two things, one of which was immediate and the other long term. First, it showed that the economic boom the West had enjoyed since the fall of the Berlin Wall in the late eighties, was finally drawing to a close. History records that Western consumers were up to their eyeballs in debt, thanks to a decade of cheap money. The end of that year was the beginning of what we now call ‘the credit crunch’, which pushed the economies of the USA, UK and Europe into a tailspin. Tower Records was simply collateral damage, because the first things that over-indebted consumers cut back on are luxury goods.

The events of that year also marked the beginning of the end for physical media – albeit indirectly. Downloads were not making a serious dent into Compact Disc sales back in 2006, but when people started buying music again in serious quantities nearly a decade later – many simply didn’t return to CD. Indeed streaming was appearing on the scene, and that’s what music buyers seemed most interested in. From 2015 onwards, the business began its long crawl back to health – aided and abetted by the rise of streaming, rather than a CD revival.

2019 saw the British music industry finally approach the giddy heights of 2006. Last year was its best in almost a decade and a half. The British Phonographic Institute reports that the equivalent of 154 million albums were bought – up 7.5% on 2018. This rate of growth suggests that next year should surpass the highest ever number of albums sold – 161.4 million in 2006. The BPI also points out the seismic shift in UK music consumption habits. There were 114 billon music streams in 2019, a 3,000% increase on 2012, which was the first year that annual figures were available. Streaming rose by 26% year-on-year, accounting for three quarters of so-called Album Equivalent Sales. Last year was the first ever to see over a billion streams.

There’s a wealth of rock, jazz and classical music on streaming services like Spotify, Apple Music, Deezer, Tidal and Qobuz. But it’s mass market pop that’s driving this transition with songs like Lewis Capaldi’s Someone You Loved – which was the most streamed song of last year, played over 228 million times. Other star attractions include Ed Sheeran, Billie Eilish and Tones and I. The latter’s hit Dance Monkey spent eleven weeks at the top of the UK’s Official Singles Chart in 2019. In the album charts, Rod Stewart, Harry Styles and Mark Ronson all made their mark.

Beneath the dramatic headlines, there are some interesting sub-plots going on. CD sales fell by 26.5% in 2019, yet the little silver disc continues to be what the BPI calls a “kingmaker” for number one albums. In the majority of weeks last year, physical media formed over half the chart-eligible sales of the number one album. There were, reports the BPI, thirteen weeks when physical media was over three quarters of the sales of album chart toppers. Interestingly then, CD still packs a punch in mainstream album sales – it’s the smaller and/or niche titles where streaming really pulls ahead.

Whilst streaming is an easy and affordable ‘off-the-shelf’ option, physical media buyers are looking for a custom fit. That’s why box sets, or special edition albums, continue to be highly popular with music buyers. The 50th Anniversary Deluxe Edition of The Beatles’ Abbey Road is a case in point here, selling in significant quantities. Multi-CD box sets are things for collectors to cherish, and the music industry is coming up with ever more expensive and elaborate releases. As a sidebar to this, the vinyl LP is continuing to grow, rising for twelfth year in a row, and accounting for one in eight of all albums bought. 4.3 million were sold in 2019, an increase of 4.1 per cent over last year and up 2,000 percent on the format’s low point in 2007.

Given that a rising tide raises all boats, the British music industry’s renaissance is no bad thing for the hi-fi world. As ever, the challenge for the industry is to keep abreast of market trends and offer high quality products that deliver what customers want. 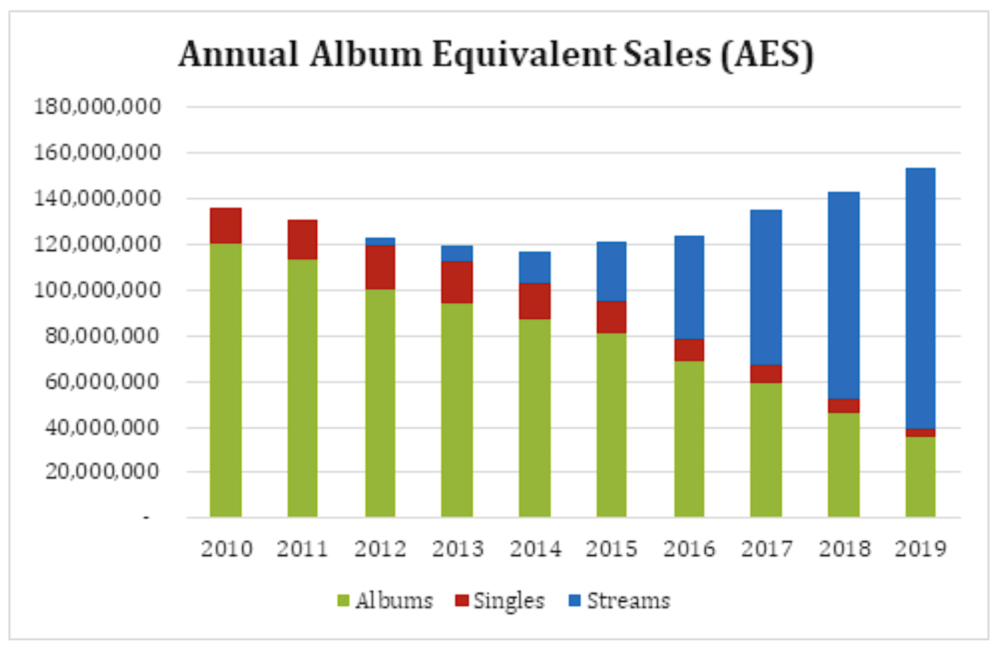