Matty Graham at Addicted to Audio unboxes and demo's the dCS Lina stack. He gives his thoughts on the sound quality and the sonic experience of listening to his favourite tracks.

You can read the full Lina review here, including a further deep dive on the Lina Network DAC, Master Clock and Headphone Amplifier.

Building the “ultimate” head-fi setup can be a game of trial-and-error - finding the right combination of digital-to-analogue converter and amplifier to pair with your headphones can often take years of journeying through various gear (and researching gear forums!) until you eventually find that magic synergy that resonates with both your listening preferences, as well as your favourite headphones. And then, once you think you’ve settled on your “endgame” rig, restlessness will invariably creep in as you wonder whether you’re actually treating your ever-more-discerning ears to the absolute best musical reproduction possible.

Headphone audiophiles are possibly even more fickle and critical than their two-channel counterparts, and I think that’s because when you have a pair of drivers sat only a couple of centimetres from your ears you tend to pick up on the minutiae of subtleties that changing any part of your audio chain imparts. It’s no wonder then that you can easily spend more than a few hours weeding through community forums with arguments raging over what DAC chip or amplifier topology reigns supreme when it comes to a pair of particular obscure headphones…and then find yourself even more confused than ever.

Unboxing and setting up the dCS Lina System 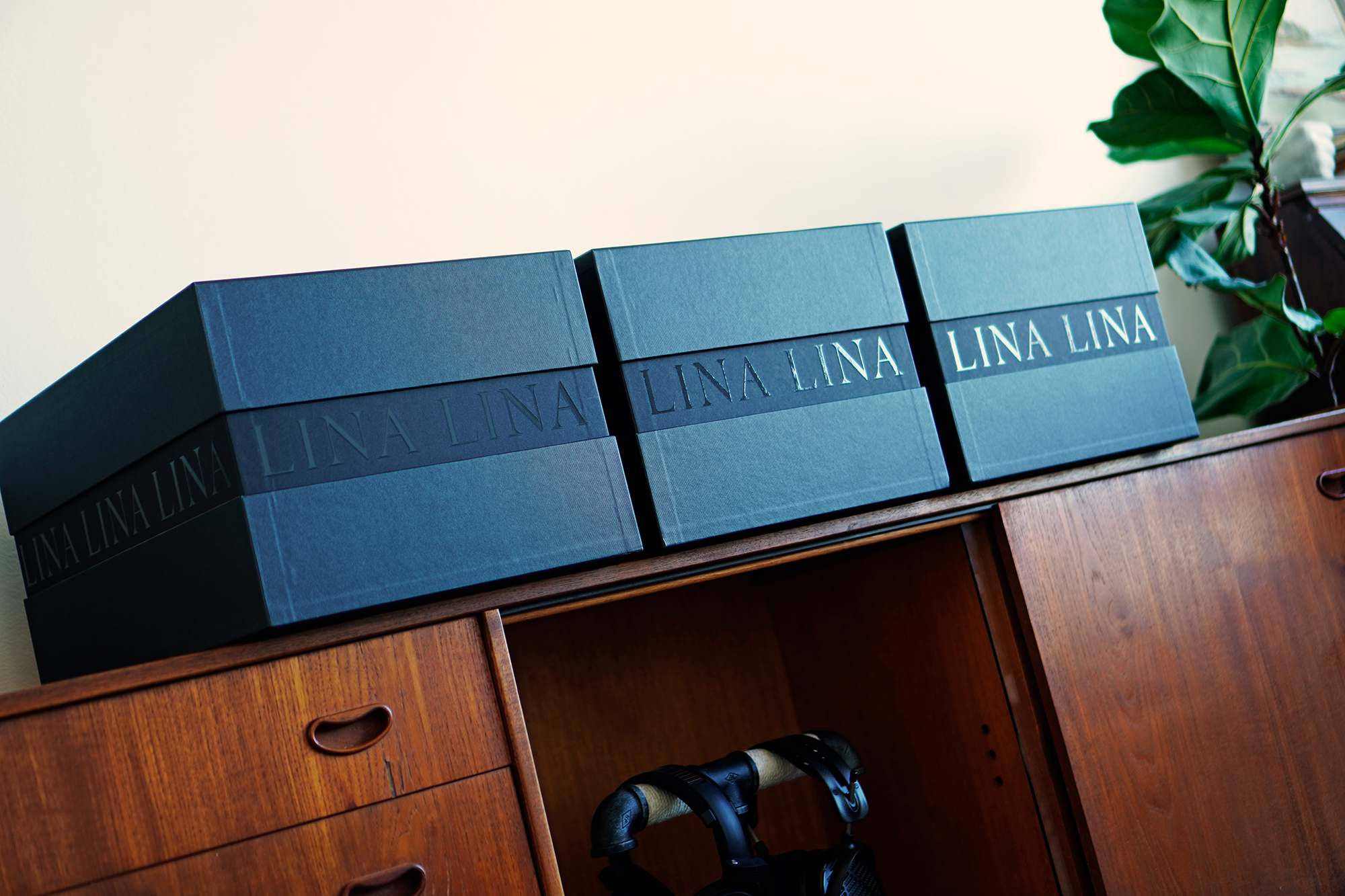 Arriving in three suitably large individual boxes, the Lina System feels very much like a serious high-end and comprehensive end-to-end audio solution the minute the (considerable) package lands on your doorstep. The three “LINA”-labelled boxes housing the DAC, Master Clock and Headphone amplifier look suitably fancy and would probably feel appropriate for the transportation of Fabergé Eggs.

Lifting the lid off each box presents you with a leather-bound instruction manual, which I suggest wading through before attempting to connect the three units together and trying to get them to work - particularly in the case of the Lina DAC, which is quite the complex and featured unit. 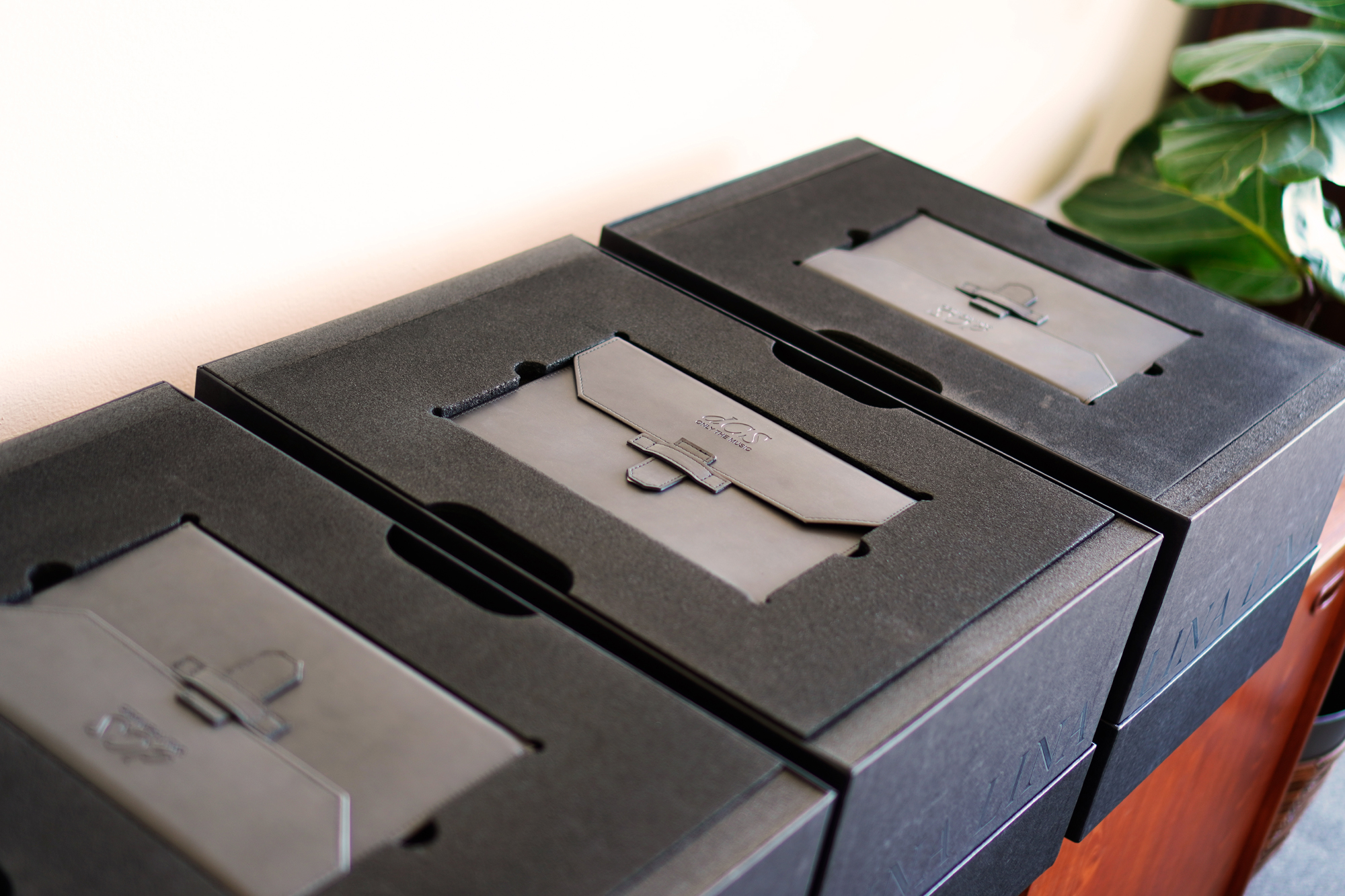 Each of the three units are discretely powered with an IEC feeding their internal power supplies, and each share the same longer-rather-than-wider rectangular dimensions, with their outer chassis being made of an appropriate solid black billeted aluminium that exudes quality the moment you (veeeery gently) lift them out of their foam enclosures. Each Lina unit is well-supplied with an array of power, digital, analogue and network cables to help combine the three Lina units into the super-Voltron that is the Lina System.

Being three free-standing units, the Lina System can be arrayed either side-by-side, or stacked into a “tower” - dCS recommends having the Network DAC on the top, the Headphone Amplifier on the bottom, and the Master Clock sandwiched in-between. Given that headphone enjoyment is (mostly) a desktop pursuit, I think that most Lina System owners will opt to have them stacked to allow for more desktop real estate, and that’s the way that I had it setup during my review time. The Lina System “stack” looks all business when positioned in its vertical arrangement - it’s not blingy or shouty, it just looks extremely capable and purposeful when parked on my desktop, towering far above any other audio gear I have on hand. You certainly feel like you’re getting your money’s worth in terms of sheer hardware alone with this 25-odd kilogram dark, brooding spire.

Listening to the dCS Lina 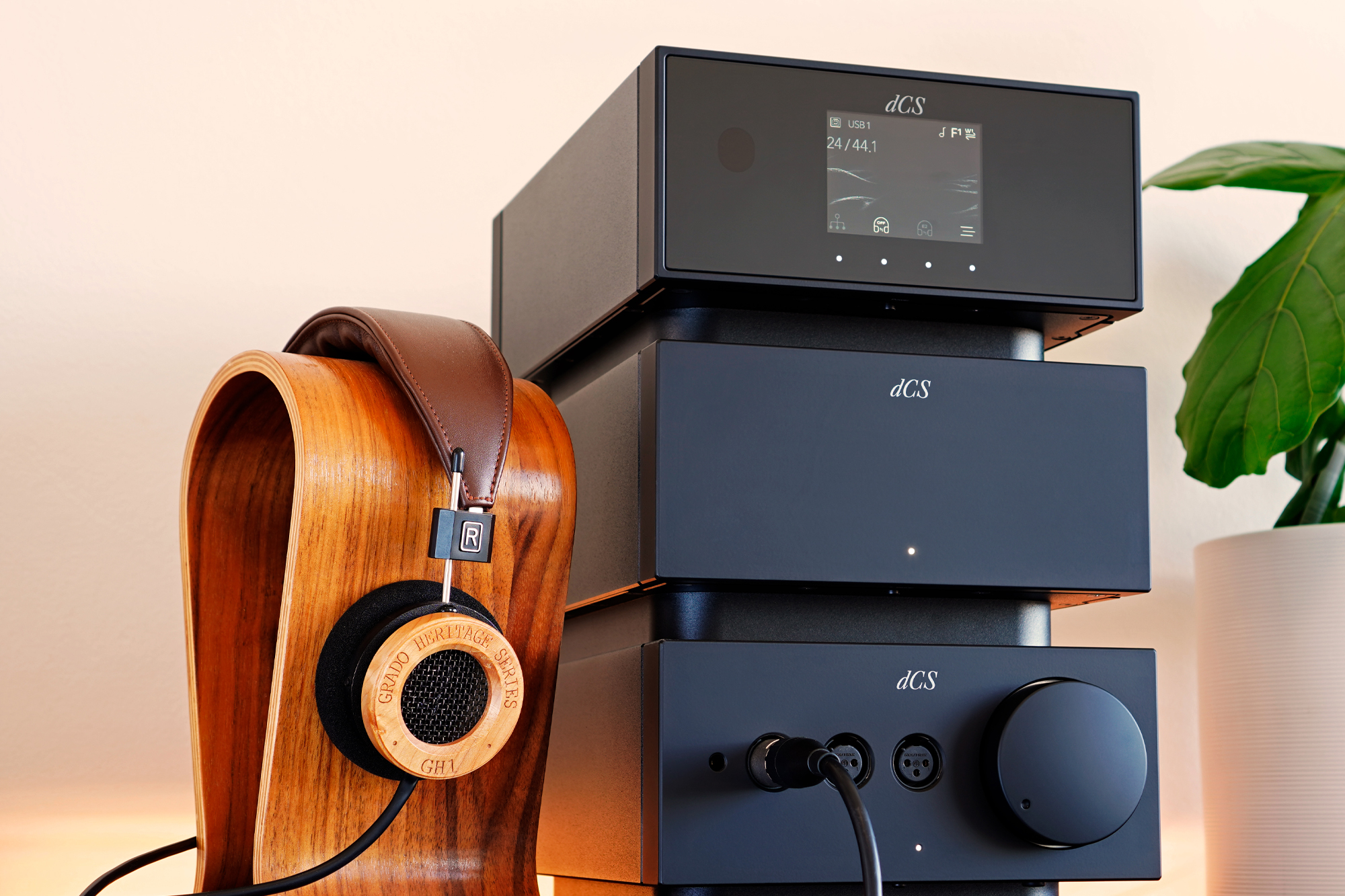 As someone who’s been fortunate enough to listen to plenty of top-tier gear as an audio reviewer, I do have a higher benchmark than most when it comes to assessing hifi equipment.

When most things sound “good”, or even “excellent”, it does tend to temper your expectations somewhat when you approach a new piece of gear, even one with the superb lineage and specifications (as well as the daunting price tag) of the dCS Lina System. I expected the Lina to sound “excellent”, but just not quite as “head-and-shoulders-above-everything-else, excellent” as it quickly revealed itself to be after only a listening to couple of tracks with it.

I won’t be so cavalier as to say that it’s “like seeing a 4K image for the first time after only seeing 1080p”, but the Lina really is unlike anything I’ve used to listen to headphones with. The Lina gives you an uncanny sense of clarity, depth, and overall correctness that not only provides you with more apparent detail on the surface (and everywhere else in-between), but it just makes music feel, well, more real.

To go back to the TV analogy again, it’s a bit like watching a 60 frames-per-second video when you didn’t know that your settings have been changed over from the standard 25/30 fps. You know something’s different - in a good way - and while you’re not quite sure how it’s managed to happen, you realise that you don’t want to ever go back over to the old way of doing things again.

As excellent as the Lina Headphone Amplifier is, the DAC really is the star of the show here. Listening with my Sennheiser HD800s, the headphones I trust most to tell what’s “really going on” in my source chain, and with which I’m used to hearing an extremely diffuse soundstage with far more modest source gear, The Lemonhead’s stripped-back acoustic cover of Round Here not only sounded but felt absolutely vivid. There is such a deft rendering around the edges of each individual vocal track and guitar strum that you feel like you can almost reach out there and grab it. Music isn’t just presented left to right with the Lina System, it’s densely and richly layered, and if you close your eyes you can picture where each echo of a plucked string, a cymbal strike or a backup vocalist is laid out on a giant stage in front, around, and even above you.

I won’t try and bother what sort of “tonality” the Lina System has, because it genuinely doesn’t have one to speak of. It’s one of the few times that I’ve felt like the gear absolutely gets out of the way and places you at the dead-centre of a track, with only the individual characteristics of your favourite headphones left to pick up the slack and do their job. “Perfectly neutral”? I’d have to say “yes” on that front. It’s not a “flat” sound though, per se - no, the Lina System has dynamics, engagement, and excitement aplenty. 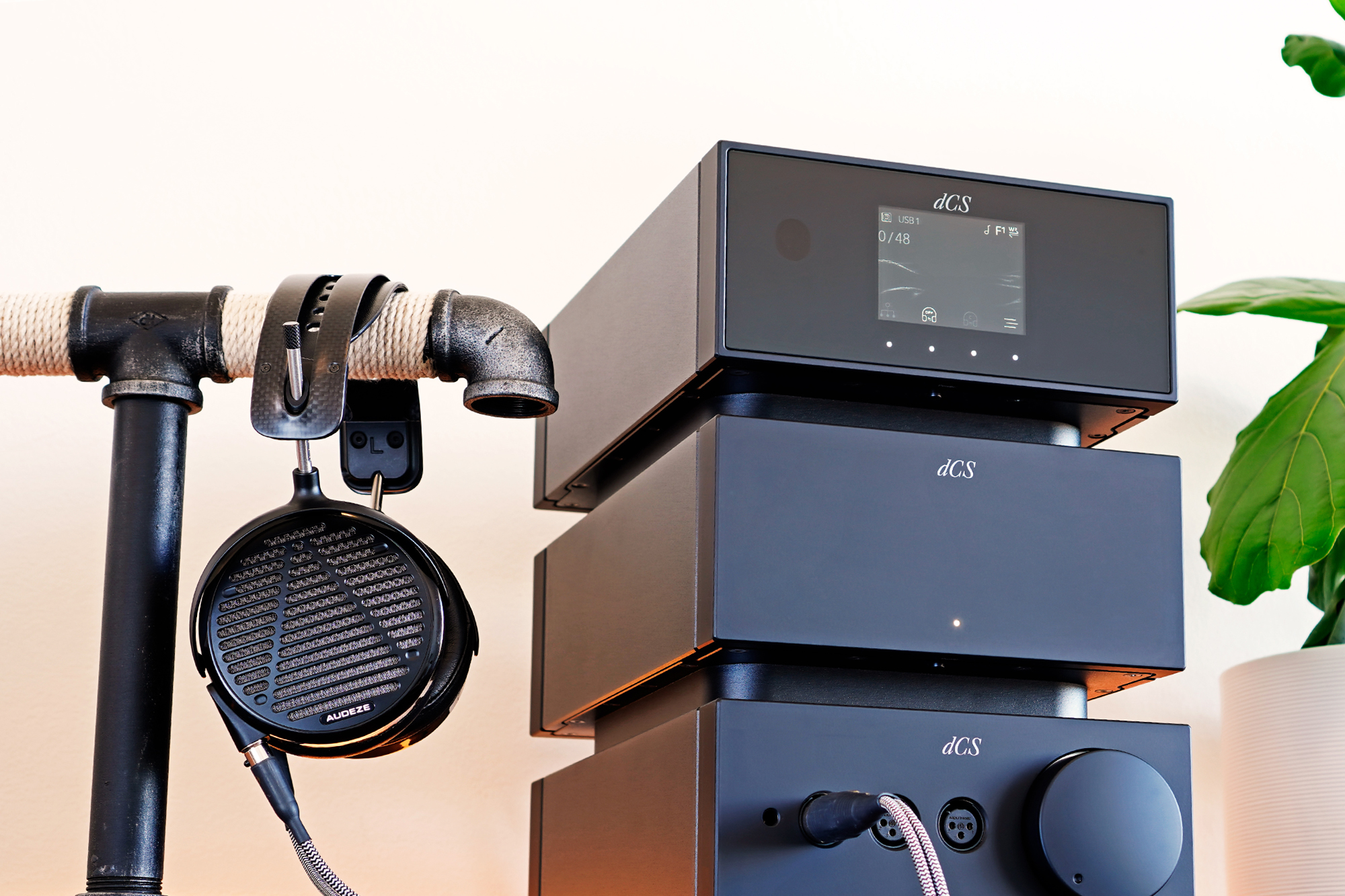 Default by Atoms For Peace is as complex and multi-faceted as test tracks come, and it shows off the Lina’s uncanny ability to adroitly step through lightning-fast transients and rapidly fire-off perfectly rendered staccato notes. Listening with the Audeze LCD-5, I felt as though I was in a sound-field that reminded me of sitting in the Hayden Planetarium at the American Museum of Natural History - the image clarity and definition is simply off the charts. The Lina Headphone Amplifier is a superb match for Audeze’s flagship planar, and in high gain it barely needs to reach 8:30 on the volume wheel to unleash all the resolving and dynamic glory that the LCD-5 is capable of mustering when paired with superb source gear.

This felt like a good opportunity to hear what it’s like to add/remove the Lina Master Clock from proceedings, and how this affected the sound. I was prepared for it to be practically unnoticeable (a bit like when changing a digital filter setting, for example), but the difference is most certainly audible - and noticeably improved with the Master Clock keeping tempo. By simply switching off the Master Clock, or changing the Clock setting in the Lina DAC from “Word Clock” to “Master”, you can immediately A/B between having the Lina Master Clock engaged or not.

With the Master Clock disengaged, things sound a little “flatter”. Thom Yorke’s vocals step back into a more smeared mix with the other notes, there’s less definition around the edges of notes that have a less-pronounced sense of attack. Overall, the Lina Master Clock gives the Lina System an added dose of incisiveness and clarity, and ultimately that’s what sets the Lina System apart from other headphone systems. Yes, the Lina Master Clock is by no means a cheap “accessory” to add on to a top-tier DAC and headphone amplifier, but if you have any of the Lina products in your short-list then you’re not exactly mucking around - you’re chasing after every last scrap of fidelity and engagement, and that’s exactly what it does.

Changing pace for a moment with a 24-bit/192kHz Qobuz stream of Beck’s Lonesome Tears, the Lina System gave me easily the closest “look” into this recording that I’ve ever heard with the LCD-5. The sheer “drama” in the string section made it feel like a live performance, and I realised for the first time that an individual track that I thought was a clarinet was in fact a synth (and I’m a clarinet player!). The timbre and dynamics in Nigel Godrich’s subtle percussion is wonderfully palpable, and you’re able to hear every subtle inflection in Beck’s voice as well as the emotion that it conveys. The Lina allows every instrumental part in the excellent arrangement is given the opportunity to shine - even during the wild cacophony in the crescendo at the end of the track.

While not “technically” an acoustic recording in the purest sense, Alanis Morisette’s Jagged Little Pill (acoustic) album is a far more intimate and bare-bones take on her 1995 globe-stomping juggernaut, and shows off a much softer side of all the emotion and personality that she poured into the original studio version. A stream of the 192kHz Tidal MQA version felt like an appropriate way to see how the Lina System would fare with the HIFIMAN Susvara, and whether the 2 Watts of Class AB power would provide the “oomph” they need to sing. During track #1, All I Really Want I got the immediate impression that the Susvara was sounding a little soft and lacking impact with the Lina. I then remembered that I had the Lina DAC’s output set to 2V by default, and a quick nudge of it up to 6V seemed to give the Lina Headphone Amplifier the added pep to help the Susvara sound more like what it’s capable of, and meant turning down the volume knob from about 10:30 to 9 o’clock.

The reverbed vocals and piano on Perfect sounded - yep - pretty much perfect over the Susvara, with brilliant organic texture and decay. The acoustic guitar in You Learn was crisp and shone with a nice crystalline texture, and the bass guitar and drum parts were deliciously taut and dynamic - even at lower volume which was interesting, as I find the Susvara usually needs quite a nudge of volume to start performing at its dynamic best. The lightning-fast snare snap on my favourite track on the album, Not The Doctor, had all the hallmarks of having a drum kit in front of me on the front stage - drums are hard to do convincingly, especially when under-driving the Susvara, but absolute full marks here to the Lina System for sheer immersion and bringing the “live/acoustic” feeling to life.

The highly successful Bartók streaming headphone DAC was our first foray into head-fi. ...

Our smallest product series yet, Lina was explicitly designed for the head-fi market.

In this movie, we visit with Jude Mansilla, founder of Head-Fi.org. He discusses how th...